The pre-Colombian cities, monuments, and pyramids, found deep within the jungles and valleys of Mesoamerica are still shrouded in mystery. While academics are still trying to piece together the history of the Maya, one thing is certain: the conquest of their powerful city of Tikal precipitated major and defining change. By deciphering newly found stone stelae, scholars have found one important name repeated many times. Siyah K’ak’. Instrumental in Tikal’s downfall, this ancient warlord was one of the most prominent people in the metropolis of Teotihuacan. 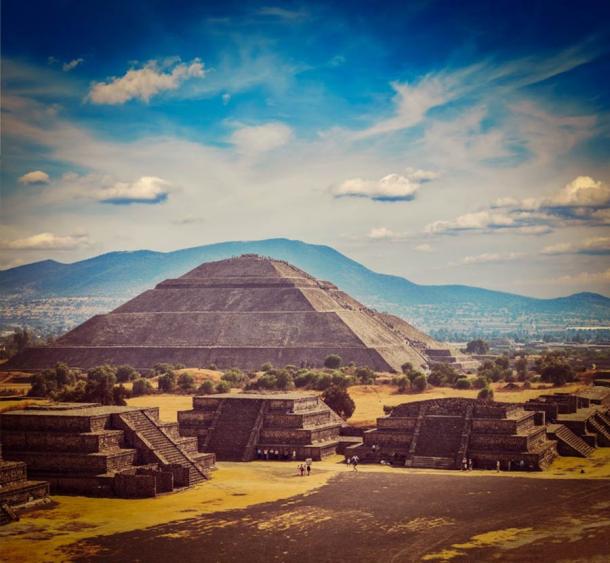 Deciphering the Story of Siyah K’ak’ and his Mysterious Origins

To this day, scholars have not fully understood the Maya. After the Mesoamerican region fell under the power and might of the Spanish conquistadors , the once sprawling and monumental cities and temples of these cultures fell into ruin. Deep jungles took over, and centuries of marvelous architecture and art were buried under the greenery.

Ever since the rediscovery of these ruins in the 20th century, understanding the Maya has become an obsession for scholars of Central America as they attempt to piece together the clues. Most importantly, it was the unique Mayan script that utilized logograms, symbols and pictures, known as glyphs, that were near-impossible to comprehend.

Still, after years of painstaking research, leading scholars have been able to decipher this ancient Mayan script. What previously seemed like intricate little pictures, turned out to be words! And thanks to this breakthrough, the secrets of the numerous surviving stelae and inscriptions from the many Maya ruins are finally coming to light.

This has been fundamental in the unenviable task of reconstructing Maya history. By unraveling this complex tapestry of events, we are able to gain an insight into the turbulent episodes that shook the world of the venerable Maya. One date stood out – 14th of January, 378 AD. That was the day when a “foreigner” warlord, Siyah K’ak’, conquered Tikal, the most powerful of all Mayan cities now located in modern-day Guatemala.

But, who was Siyah K’ak’? Sadly, few details have been left behind. What little historians found out was pieced together from several stelae, a type of tall stone shaft, discovered in Tikal. These monuments were covered with glyphs and inscriptions, and they told of the warlord’s role in Tikal’s downfall.

His name is variously spelled as Siyaj Kʼakʼ, K’ak’ Sih, Ciak K’ak’, and so on. Originally, historians named him “Smoking Frog”, due to the representation of his name on the glyph. However, once the Mayan script was deciphered, it was found out that the meaning was totally different. Siyah K’ak’s name actually means “Fire is Born”, and he was an exceptionally powerful man. 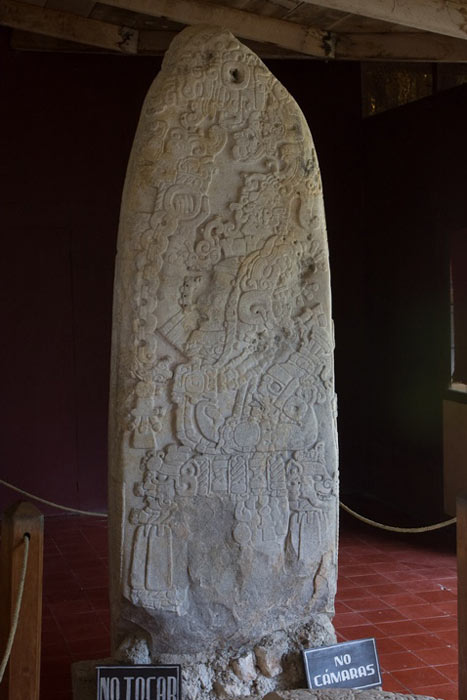 Stela 31 is the single most important historical text from Tikal. It describes the arrival of Siyah K’ak’ in 378 AD. (Greg Willis / CC BY-SA 2.0 )

Fire is Born hailed from Teotihuacan. Located in the Valley of Mexico, some 40 kilometers (25 miles) from modern-day Mexico City, Teotihuacan was one of the most advanced and most powerful cities of pre-Columbian Mesoamerica. At its height, it was a sprawling metropolis that exceeded 100,000 inhabitants, possibly reaching 250,000, making it one of the largest cities on the planet at the time.

The ethnicity of its rulers and citizens remains a mystery, but there is no doubt that it was an economic and cultural superpower that came to influence and dominate much of the region. And that, of course, placed it in direct conflict with the equally powerful Maya civilization.

Many scholars agree that Siyah K’ak’ was likely the brother of a powerful King of Teotihuacan, a man called “Spearthrower Owl”. If not a brother, Fire is Born was nonetheless his most powerful general. And that made him the ideal figure to take part in the expansion Teotihuacan power in the region. Around that time, the Maya world was facing a series of cardinal changes. They were reaching the heights of their achievements, having opened up to the outside world, expanding their ties with other, neighboring cultures. These cultural ties were to place the Maya in a heightened position of power, setting the stage for what is now known as the Classic Maya Period. However, a change was looming, a major transformation, at whose forefront was none other than Siyah K’ak’.

Spearthrower Owl deployed his trusted warlord on a mission to the southeast, towards Tikal. The reasons for Siyah K’ak’s mission are clearly understood today. Teotihuacan had to solidify its power and expand. The goal was to bring the whole of the Peten region under Teotihuacan’s sphere of influence, either through diplomacy and persuasion, or – if needs be – through warfare.

The region boasted a number of prominent cities and city-states, and that meant a lot of economic and strategic power. However, the chief target of Teotihuacan was the rivaling city of Tikal. It was the most powerful and influential city-state, located in the center of the Peten region.

If rulers of Teotihuacan were able to conquer Tikal, other, lesser cities would soon follow suit. This difficult mission was given to Siyah K’ak’, which indicates that he was perhaps the second most powerful man in Teotihuacan after the King. 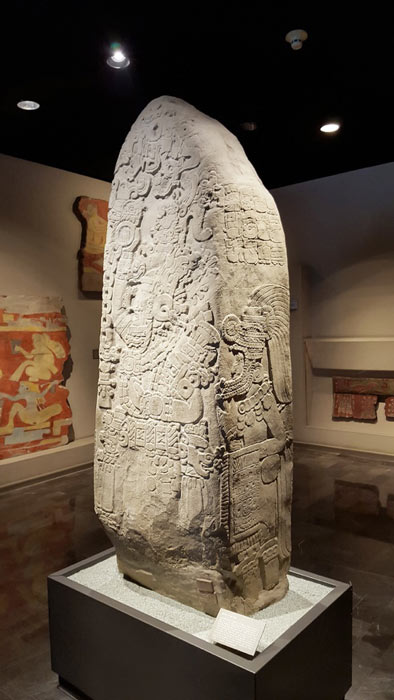 Several recently discovered stelae helped scholars to piece together the puzzle of Siyah K’ak’s movements towards Tikal. Inscriptions bearing his name were found in several Mayan cities and sites in the Peten basin region, mapping his path. Stelae were discovered in Waxaktun, Copan, and Waka.

The last of these, Waka (also known today as El Peru ), seemed to hold the most strategic importance for Siyah K’ak’. The city of Waka was situated on a strategic promontory, and was a rich port on the shores of San Pedro river. It had a naturally protected harbor which was ideal for launching a massive military action, both from land and from water.

It seems that Siyah K’ak’ quickly understood this, and made the conquest of Waka his first goal on the road towards Tikal. After all, it was situated just 80 kilometers (50 miles) to the east of Waka. It is proposed that the ruler of Waka, known as Sun-Faced Jaguar, welcomed Siyah K’ak’, and did not offer resistance. The reasons for this were likely political, and there is a possibility that the leaders of Teotihuacan and Waka had entered into an alliance, erecting a sacred fire shrine to commemorate this.

The fact that Siyah K’ak’ arrived at Waka and gathered reinforcements further points to this possibility. To that end, some historians made attempts to recreate the image of Siyah K’ak’s army, based on what is known of the warfare methods of the era. It is likely that his original force from Teotihuacan were shock troops, a kind of elite expeditionary force fit for the daring task of conquering Tikal.

These troops likely carried javelins and spear-throwers that were iconic for Teotihuacan, combined with back shields which were covered with shining pyrite – designed to dazzle and confuse an enemy. This powerful army was thus reinforced with common warriors from the Peten basin, footmen equipped with short and deadly stabbing spears, and powerful stone axes. Both were armored in cotton vests stuffed with rock salt – a lightweight and potent armor. 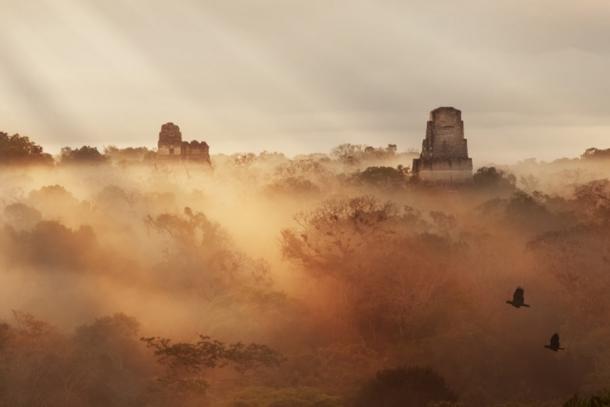 Siyah K’ak’ and His Great Army En-Route to Tikal

After securing his first goal – the city of Waka – Siyah K’ak’ and his army continued their expedition. It is probable that they continued in war canoes, following along the San Pedro River until they reached its headwaters. Once there, the armada continued on foot, most likely alongside the river shore.

Of course, such an army cannot pass unobserved. Lookouts probably spotted it, and news of its approach reached Tikal soon after. In an attempt to defend their city, Tikal’s elite sent out an army to face Siyah K’ak’.

The two forces met likely around 26 kilometers (16 miles) outside of Tikal, where Siyah K’ak’s force emerged victorious from the ensuing battle. This much can be guessed from the inscriptions that were later erected at Tikal. Either way, Siyah K’ak’ continued his “blitzkrieg” march towards his goal, and eventually reached Tikal on January 16th, 378 AD – just a week after arriving in Waka.

Most of this was deciphered around the year 2000, when a specialist of the University of Texas at Austin, David Stuart, managed to translate the glyphs on Tikal’s prominent “Stela 31”. The glyphs give the exact date of Siyah K’ak’s arrival, and also explain what unfolded after Tikal fell. Most notably, it mentions the fate of the city’s ruler – known as Chak Tok Ich’aak I , or “Great Jaguar Paw”.

Great Jaguar Paw died that same day, most certainly executed by the conquering troops as a way to secure the city. Furthermore, the army razed Tikal’s most prominent monuments, as well as stelae that recorded the feats of preceding rulers.

This meant that an entirely new era was beginning in this metropolis, as all subsequently erected stelae would tell of Siyah K’ak’ and his successors. Soon after these events, Siyah K’ak’ received the title of Ochkin Kaloomte , meaning Lord of the West. The west here indicates his origins at Teotihuacan.

Some scholars interpreted this whole situation in a different way. They propose that Fire is Born wasn’t actually a Teotihuacan warlord, but instead a powerful figure from Tikal itself. It was proposed that he represented a ruling faction that was ousted after a coup d’état by Great Jaguar Paw’s father – many years earlier. In this new scenario, Siyah K’ak’ was returning “from the west” – i.e. Teotihuacan – in order to reclaim what was lost. However, there is no significant proof for this theory, and it has been largely dismissed. 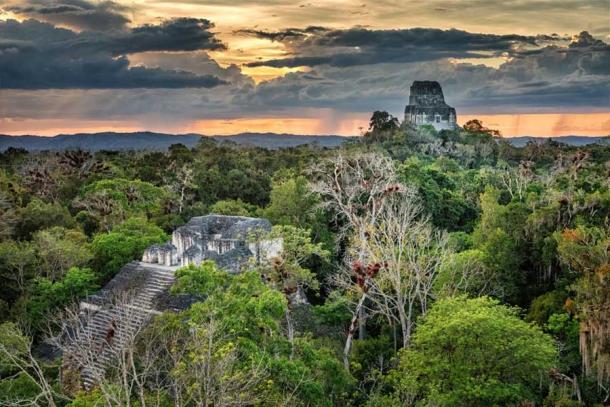 After Tikal fell, Fire is Born had to pacify its ruling class and the neighboring regions, and this was no easy task. What is almost certain is the fact that he installed a new “puppet” King, likely a descendant of Teotihuacan’s King Spearthrower Owl. This perhaps ushered in a new ruling dynasty.

The Tikal stelae tell us that this new “foreign” King was most likely a minor, so Siyah K’ak’ had to act as a regent, holding all the real power. The boy-king’s name was Yax Nuun Ahiin I , or “First Crocodile”. Most commonly he is known as “Curl Nose”, after the image of his glyph.

After solidifying his rule in Tikal, Siyah K’ak’ – acting as its de facto ruler – continued his offensive, expanding Tikal’s influence in the region and conquering other cities in the Peten basin. Some of these were sites such as Bejucal and Rio Azul , where inscriptions mentioning Siyah K’ak’ confirm that he conquered them. What is more, references to Siyah K’ak’ have been discovered in cities as distant as Palenque, a site that lies roughly 240 kilometers (150 miles) to the northwest.

Without a doubt, Siyah K’ak’ was a great and powerful man. He was a skilled warlord, relying on both diplomacy and warfare to complete the mission of Teotihuacan’s expansion. With a lightning fast expedition, he conquered Tikal and ushered the region into a new era, bringing great cultural and economic change. New cultural traits from the Valley of Mexico were firmly introduced after his arrival, and would remain for a long time after.

Of his death, however, nothing is known. His burial place has been lost to time, like that of many others in the Maya world. However, there is no doubt that he was one of the most prominent men of his time. Inscriptions of his name were erected on stelae long after he conquered Tikal, and likely long after he died. And that is proof enough that Fire is Born – Siyah K’ak’ – was a figure of great importance.

Schele, L. and Mathews, P. 1999. The Code of Kings: The Language of Seven Sacred Maya Temples and Tombs. Simon and Schuster.